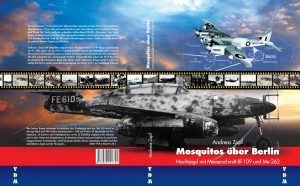 Following a research project that lasted for the better part of the last five years, I can now say that the result – an almost 600-page strong book – is in the publishing and should be available soon.

The book is written in German but the publisher and me are open for interested English-language publishers since a good portion of the work covers the operations of the Mosquito-Squadrons of the Light Night Striking Force.

We are aiming for availability around mid of April 2018 so stay tuned, I will update with possible sources as they become open or orders. For the non-German readers, here is a transcript of the book’s cover text:

“Late in the summer of 1944, the skies over the Reich were mostly dominated by the Allied air forces. The heavy bombers of the USAAF at day, the ones of the RAF at night. In addition more and more the fast deHavilland DH.98 ‘Mosquito’ of the Light Night Striking Force which can – with little to no opposition – road the skies over the German Cities more or less unchallenged. Besides the ever present Flak, there is not much they have to fear.

‘Not much’, however, is relative. With their fast and agile Messerschmitt Bf 109, some specialized units such as the 10./JG 300 and later II./NJG 11 are operating especially against the fast ‘Wooden Wonder’. And starting December 1944, first nocturnal missions using the Me 262 are added to the threat. Starting out as ‘Kommando Welter’ and being taken into regular operations as 10./NJG 11 later, a handful of skilled pilots are flying the single-seated Me 262 A and later the Me 262 B-1a/U1 twin-seater to counter the nightly Mosquito attacks.

This book shines a light at the almost untold story of the Nachtjagd with the Me 262. 596 pages, 160 b/w photos, 69 reproduced documents, 24 maps and flight maps are adding to a story reproduced from material hidden in archives around the world, flight logs, written accounts and many hours of personal discussions with those involved. Enjoy the untold story of a unique unit and their nocturnal stalking of the famous ‘Mosquito'”

Stay tuned for more information as it becomes available…

On a further note, I will retire some articles written early on as the information contained within is not up-to-date with the latest findings of my research – these articles include the ones on

The original post has been maintained and updated with a link referring to this post so any other web sites referencing the original articles can operate without broken links.

I will also adjust the information contained in www.kommando-welter.de since the information contained there is also deprecated and in many ways is outdated and/or contradicts later findings. Again, I will try to make sure that no broken links remain but since that site has covered the topic in much more detail, I might settle for a simple referral to the book’s new web site which will go live in a few days.

This entry was posted in General and tagged NJG 11. Bookmark the permalink.