Recently, I have posted an article about historic maps – I have acquired a new set of maps in the past days and thought, I’d share them with you as well.

The first one is called Schlag nach über den Südosten – translates into “Check out the South-East”.

The map has been issued by the Wehrmacht and dates back to 1941. It is part of a series called Tornisterschrift des Oberkommandos der Wehmacht.

The idea was to provide the regular soldier with information about the countries, the religions, the local customs, etc. in a format small enough to carry around in their backpack which is what “Tornister” in old German means.

This first one cover the south-eastern part of Europe which – in 1941 and until 1943 – was one of the major theaters of war.

The map covers southern Europe from Prague in the North to Tripolis in the South and from Sicily to Istanbul.

As such, it covers most of Italy, all of the Balkans, the coastal areas of Libya and Egypt and the Aegean Sea.

Scale is 1:2.500.000 and the publisher is Bibliographisches Institut AG., Leipzig. A map, handy for someone trying to grasp the locations of the Mediterranean Theater of War and the War in the Balkan.

Download size is roughly 8MB at 2000 x 3000 Pixel. Stitching and re-coloring worked pretty well as the map is in rather good shape for its age.

Next up is the Karte von Westeuropa – the Map of Western Europe. It dates back to 1944 and also belongs to the series Tornisterschrift des Oberkommandos der Wehmacht.

That includes the coast of North Africa with Algeria and Tunisia, Spain and Portugal, France, the British Isles and Ireland, the Netherlands, Belgium, Luxembourg, Switzerland as well as Denmark. Partially covered are Italy, the Deutsche Reich, Norway and Sweden. 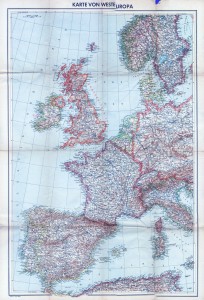 The map is particularly interesting as it is providing a single-sheet view on the Western European Theater of Operations and is the perfect addition to the previously mentioned map of South-Eastern Europe.

Again, the map is available for download, the size is roughly 8MB, the dimensions are 2000 x 3000 pixel.

Stitching was a bit difficult this time as you can see by the map’s caption. But in general, the quality of the scanned image is above average, also recoloring has worked out nicely.

There is one final map to cover now – I have missed the Gea Übersichtskarte Skandinavien on eBay a little while ago – and it does not come up very often.

In return, I have gotten yet another one of the Tornisterschriften, this time from 1939/40.

This one is labeled Schlag nach über Skandinavien, literally “Check out Scandinavia” although the map itself is titled Nordseeländer – North Sea Countries.

It covers the northern European area from 10°West to 20°East and from 48°North to 72°North.

The area covered includes parts of Iceland, the British Isles, Ireland, the northern parts of France, almost all of the Deutsche Reich except for some parts of East Prussia, Denmark, the low countries, Norway, Sweden and the western parts of Finland.

The map closes the gap my collection has on Northern Europe, especially since the coverage goes up to the area around Banak and Kirkenes, from where the Luftwaffe was flying their attacks against Murmansk.

This map comes in handy for all operations over the North Sea and the British Isles as well as for the Norwegian Theater of Operations.

Download size is roughly 8MB, resolution is 2000 x 3000 pixel. Stitching and color correction worked extremely well although the original is in a pretty poor shape.

As always, I am not providing the full-scale maps but down-sized versions – the originals are 12000 x 8000 pixel and way beyond reasonable download sizes. Still, I hope these maps help those that need access to material of the time, original – although digitalized – from the period.